The EtherMeter contains an RS485 port for Modbus/RTU and DF1 communications in multi-drop applications.

When using the RS485 port, the following EtherMeter terminals are used:

In order to use RS485, attention should be given to the EtherMeter’s dip switch positions:

In my experience, it is preferable to use a single, centralized 24VDC power supply to power the Modbus Master — along with all the remote RS485/Modbus Slave devices.  This ensures that signaling between all devices are referenced to a common ground potential.  In order to most-easily achieve this, a single jacketed cable can be used to transmit both the 24VDC power and the RS485 Modbus signals.

For the most demanding (higher baud rate and/or long distance) applications, I generally recommend Belden 3084A cable, which contains two shielded/twisted pairs plus an overall copper braid.  The 24 gauge pair (Blue/White) has a characteristic impedance of 120 ohms, which is optimal for RS485 transmission.  The 22 gauge pair (Red/Black) is designated for 24VDC and GND.  The cost is generally around $1/ft.  And for especially long cable runs, a more stout version is available, the Belden 3082A cable, whose power and data pairs are 15 gauge and 18 gauge respectively.  The cost is generally around $3/ft.

For more economical 2-pair wiring, I recommend Belden 8723 cable.  It consists of two 22 gauge shielded/twisted pairs (red/black and green/white).  Although it has a characteristic impedance of 52 ohms and therefore does not conform exactly to the RS485 specification, it can work very well for  shorter distances and/or lower baud rates.  The cost is generally around $0.40/ft.

In situations where it is not feasible to power the Modbus master and all remote slave devices from a single DC power supply, then all devices should be powered locally and individually using isolated DC power supplies.  Furthermore, the signal grounds of all devices should be tied together to a common voltage reference.  Each reference tie should utilize a resistor to prevent large currents from traveling on the reference wire.  For this purpose, Terminal 22 on the EtherMeter functions as a signal reference point with a built-in 100 ohm current-limiting resistor. 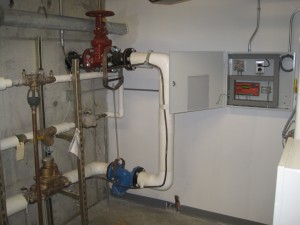 An EtherMeter Connected To A JACE-Tridium System Via Modbus/RTU over RS485. The System Is Monitoring Total Consumption And Flow-Rate For Two Connected Water Meters (Sensus SR and Sensus Compound). This Facility Houses A Fortune-500 Software Company In The Boston Area. A Pair Of SCADAmetrics Touch-Read Filters Allow Both The Utility AMR System And The Building Automation System To Share The Meter Signals.

I highly recommend that anyone using Modbus/RTU over RS485 should browse the web for further information.  Here are a few articles that I’ve found to be particularly useful and interesting: 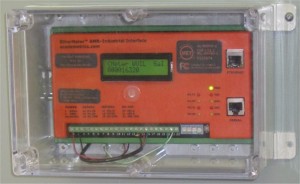 EtherMeter Connected To A Remote Controller Via Belden 8723 Cable. The EtherMeter Is A Modbus/RTU Slave, And It Shares The Same 24VDC Power Supply As The Modbus/RTU Master. 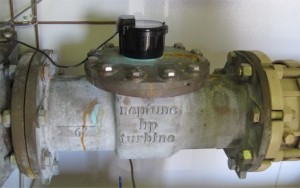 The Connected Meter: A Neptune 6″ HP Turbine, Outfitted With An E-Coder Register.

View all posts by Jim Mimlitz →